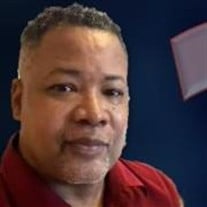 Tony Huff age 58, of Indian Head Maryland transitioned into eternal life on September 20, 2021. He leaves behind Danielle Rainey (daughter), Blanche Huff (mother), Kimberly Little (half sister), Joy Hines (love of his life) and a host of family and friends. He is preceded in death by Arthur Huff (dad), Jerome Silva (step dad). Tony Huff was born September 24, 1962 in Youngstown Ohio from humble beginnings. In his early years of schooling he always strived to be the best, which exemplified his foundation. He was a great athlete, playing for the McCullough Williams little league football team in Youngstown and continuing at Rayen HS where he played freshman football and ran for the Tiger's Track & Field Team. He shifted his athletic skills to boxing and was a standout in the Youngstown Golden Gloves Boxing Tournaments. He possessed unbelievable strength and agility which allowed him to outperform other athletes with ease, especially in boxing and weightlifting. In addition to being an athlete, Tony was very talented musically. He was an artist at heart. Tony had a Federal Government career of over 30 years including military service. He was awarded many times throughout his distinguished career as a writer, and he was second to none. At the age of 35 on May 12, 1998 Tony Huff and Cynthia Rainey were blessed with a beautiful daughter, named Danielle, Rainey who was the apple of their eye. Danielle was so very special to Tony and he loved her very much. You would often find Tony on the road to one of Danielle’s basketball games or posting her impressive moves on Facebook. He was a proud father and he was Danielle’s number one fan. Tony was a man of God; he had a deep spiritual relationship with the almighty. He always had something positive to say and was kind and generous with his thoughts. Always the ultimate encourager… He made it his goal to uplift others. He put others first. In conversation, he would often humble himself by recognizing and acknowledging the strengths and talents of others. He was genuinely concerned about people close to him and would give warm and caring advice after listening fully to what you had to say. He was never too busy to give a listening ear. What struck you most about Tony was his optimism. He was a dreamer and always willing to try. Tony knew he had to create his own destiny and nothing was going to be handed to him. He had tremendous determination and a will to succeed. Tony left a deep and lasting impression on those who knew him. His memory will be evermore. He had a dynamic spirit and his faith in God was strong. He will truly be missed. Live-streaming of the funeral service will begin @ 11:00am.

The family of Mr. Tony Huff created this Life Tributes page to make it easy to share your memories.

Send flowers to the Huff family.