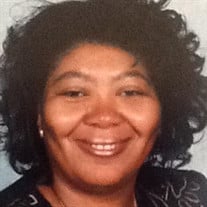 Rozellia Elaine Hurt (65) of Fort Washington, Maryland Life is but a stopping place. A pause in what’s to be A resting place along the road to sweet eternity We all have different journeys, different paths along the way We all were meant to learn some things, But never meant to stay…. Rozellia Elaine Murray Hurt was born in Rosehill, North Carolina on January 23, 1953 to the late William Paris Murray, Sr. and Lillian Davis Coston Murray. She was the first of 10 children. Rozellia attended Great Mills High School in Great Mills, Maryland and went on to receive a RN Degree from The College of Southern Maryland in Charles County, Maryland. Rozellia was joined in marriage to the late Lewis Leon Hurt, Sr. in 1970 and from that union came four children. Later she had another son. Rozellia worked for over 20 years as a LPN at Caledonia Hospital in Brooklyn New York, and as a RN at St. Mary’s Hospital in Leonardtown, Maryland, and Maxim Healthcare Services in Silver Springs, Maryland and then went on to Private Duty Nursing for numerous clients. Her passion for taking care of others and nurturing countless people back to health is what truly defined her. Rozellia developed relationships with them so they never felt like clients. Her will to see others prosper from her efforts is what brought her joy. Her selflessness was immeasurable and will always be the cornerstone of her legacy, which she has instilled in her children and grandchildren. With all of Rozellia’s accomplishments in her life and how she touched others, her greatest glory as she constantly spoke it, was to be accepted by Yahweh and her soul to be kept in heaven as one of His faithful children. Rozellia is preceded in death by her grandparents John C. Coston, Sr. and Myrtle Coston, and her grandmother Sue B. Murray; her parents William P. Murray Sr. and Lillian C. Murray; her son Antonio Eugene Hurt; her husband Lewis Leon Hurt Sr.; her life partner Shadiyah Ben Yahudah Ben Israel; and her grandson Elijah Darrell Hurt. Rozellia leaves to cherish her memory her children Louis Leon Hurt, Jr. (Tiffany), Leona Renee Hurt, Tyrone Marcello Hurt, and Lloyd Patrick Hurt (Sandesha); her sisters, Barbara Spencer, Angela Caesar (Randy), Rhonda Shade (Donnie), half sisters Brenda Mann (Shane)and Sheila Shavers (Lester) and one foster sister Kendra Robinson; brothers William Murray Jr., Durwood (Cynthia), Russell (Loretta), Sheldon Murray (Regenia), Dennis (Cathy), and Michael Murray; her daughters in-law Sandesha Rene Hurt, Tiffany Nicole Hurt, Tiffanee Gadsden Hurt, LaTiffany Washington Hurt, and Natasha Duckett; her grandchildren Joshua, Sarah, Demetrius Sr., (Blake), Shemariah, Anthony (Tiana), Jadan, Treyvon, Bryanna, Kiyah, Kaylah, Samarra, Justice, Tayona, Mackeyla and Symphony; great grandchildren Justin Jr., Leianna, Autumn, and Demetrius Jr.; her pet companion Brittany; and a host of uncles, aunts, cousins, nieces, nephews and friends.

Rozellia Elaine Hurt (65) of Fort Washington, Maryland Life is but a stopping place. A pause in what&#8217;s to be A resting place along the road to sweet eternity We all have different journeys, different paths along the way We all were meant... View Obituary & Service Information

The family of Rozellia Elaine Hurt created this Life Tributes page to make it easy to share your memories.

Send flowers to the Hurt family.