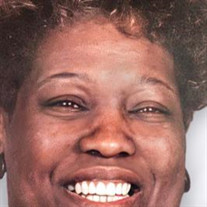 Natalie Vaunita Talley Brown(71)of Oxon Hill, Maryland transitioned into eternal rest on Wednesday, February 2, 2022 with her beloved daughter by her side. Natalie Vaunita Brown was born on April 26, 1950 to Agnes and Archie Talley Sr. in Washington, DC, at DC General Hospital. Natalie grew up in Seat Pleasant, MD where she attended Prince George’s County Public Schools until she graduated from Central High School in 1968. She then attended Bowie State University for two years and Federal City College for one year before starting her career in education in Washington, DC. Natalie had such a passion working with the children at Turner Elementary and was recognized for doing such a remarkable job that she continuously received promotions until she became a Certification and Accreditations Specialist for the Department of Education. Natalie, who was also affectionately known as Ma, Aunt Nat, Big Nat, Mrs. Brown, and the name that meant the most to her Grandma, raised her four children in Glenarden, MD. She became the neighborhood Mom that fed the community countless times, even if she didn’t know you she still made sure you left with a plate of food. She had this nurturing spirit due to the unsettling experiences she had growing up during segregated times and the discriminating treatment she received as a child going to a predominantly white school. She knew in her heart that if she had anything to do with it she would always make people feel welcome and make sure they ate. Natalie may have experienced painful times as a child but she had her “Crew” that made life a lot easier because they did everything together. These twelve young women, Ann Williams, Linda Lewis Lynch, Beverly Hall, Mary Hammond, Gladys Phelps, Cheryl Jackson, Jackie as well as others who are no longer with us, including Natalie, grew up in Seat Pleasant as friends and schoolmates. They stayed close to one another as much as they could by playing together, eating together all the way through high school until they were able to form their own “club”. Central High School had its first Drill Team of 12 young black girls with Natalie included formed in 1964. The best years of Natalie’s academic life was spent at Central High School, during a time when Blacks didn’t even realize they were poor because of the unity and likeness. Natalie qualified to compete for the Olympics in 1968 as a track and field contestant. As of today she still holds the Maryland State shot-put record for 1968. Natalie was preceded in death by her parents, Agnes and Archie Talley; her siblings Bernadette Talley and Eric Talley; three of her four children, Anthony Brown, Dwayne Brown and Contessa Brown; and one grandson Alfred Brown. Natalie leaves behind a loving family to cherish her memory and is survived by her husband Junior Leroy Brown, her daughter Javon Brown (Randolph Spearman), her loving grandchildren Daizja Hamilton, James Roberson, Marquise Sheffield, Jayani Livingston; great-grandson Jacob Dwayne Hamilton; siblings Audrey Talley-Rush (John Rush) and Archie Talley Jr.; nephews Michael Talley (Chanel Talley, Laquan Lightfoot), Rick “RockSteady” Brown (Leah Brown), Lawrence Watson, Timothy Brown, and Antonio Brown and niece Betty Brown; and cousins that were raised like her very own children both Renee Talley’s, Kathy Tolson and a hosts of other Family and Friends.

Natalie Vaunita Talley Brown(71)of Oxon Hill, Maryland transitioned into eternal rest on Wednesday, February 2, 2022 with her beloved daughter by her side. Natalie Vaunita Brown was born on April 26, 1950 to Agnes and Archie Talley Sr. in... View Obituary & Service Information

The family of Natalie Vaunita Talley Brown created this Life Tributes page to make it easy to share your memories.