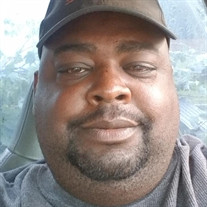 Remembering Jason I have fought a good fight, I have finished the race, and I have remained faithful. And now the prize awaits me, the crown of righteousness, which the Lord, the righteous Judge, will give me on the day of his return. And the prize is not just for me but for all who eagerly look forward to his appearing. 2 Timothy 4: 7-8 NLT On Sunday, March 21, 2021, The Lord stretched out his hands welcoming Jason to his forever home. A time to be born: Jason Cornelius White was born on October 30, 1972, in Prince Georges County, Maryland to John T. Moore and the late Sharon D. White. A time to learn: Jason attended Doswell E. Brooks Elementary, Francis Scott Key Middle, and graduated from Suitland Senior High School in 1990. Jason’s passion for cars led him to further his education by attending Lincoln Technical Institute. He studied and mastered anything with an engine. Adding to his trade, Jason obtained his CDL license. Entering the workforce: While in high school, Jason followed the family trait and began working for Giant Food as parcel pickup clerk in 1988. Furthering his career, he began working for the State Highway Administration as a facility maintenance tech form 2001-2005. From 2005 until his retirement in 2011 Jason utilized his CDL and became a truck driver for Lyon & Conklin. He battled many health issues, but he never let them hinder his process. As he would always say “I’m built Ford tough!” A time to love: Jason met, fell in love and married Tania M. Wright- White on July 30, 2010. He raised three strong young men whom he adored: Da’Lonta, Leon, and Zion, as he would call them Son 1, Son 2 and Son 3. After early retirement, Jason followed his passion to become an entrepreneur and start Big Man Lawn Maintenance now, T & J and Son’s Lawn Maintenance. If you didn’t find Jason and his Crew cutting, you would find him working on cars, hauling something, plowing snow, at the racetrack or spending time with his family. He was such a loving and caring man. From his daily “Good Morning” Facebook post with family check ins, to taking memorable selfies with everyone. Jason was such a Gentle Giant. He had the biggest heart ever. He would give you the shirt off of his back. Jason made a lasting impression on everyone he came across with his infectious smile. The next chapter: The legacy he leaves behind will forever live in our hearts. Jason leaves to cherish his fond memories, his beautiful wife of 10 years Tania M Wright-White, 3 sons: Da’Lonta Wonsom (Yolonda) aka son 1, Leon Little, III aka son 2, and Zion J. McNeil known as Smoke and son 3, Father: John T. Moore. Sisters: Carla Allen-McLean (Chris), Ava Atkins (David), and Tajeria Moore. Brother Antonio D. White (Erika). Nieces: Kortiney and Laci White, Peyton Atkins. Nephews: Duane Carter, Kyre’ Williams, King Atkins. Goddaughter: Dominique Berkley. Aunts: Jaqueline Peters (Rodney), Tammie Edmunds (Leon), Alice Fowler (David). Uncles: Charles (Denise), Kelvin, Dennis (Kim), Craig (Jean), and Victor White, Willie “Billy” (Annette) and Johnny Ray (Renee) Moore. Family in love Mr. & Mrs. Charlies and Dreama Wright, Lance (Kelly), Marcus (Melissa), and Malcolm Wright. Best Friends James “Jimmy” Ford and Melvin “Scooby” Proctor. And a host of Aunts, Uncles, Cousins and many many many friends whom he considered FAMILY. Jason is welcomed into heaven by: His loving mother: Sharon D. White, grandparents: O’Neal “Pop Pop” Woolfolk, Herbert P. White Sr., Mr. And Mrs. Willie & Beulah Moore Sr., Aunt: Mae Grant, Uncles Herbert “Bubble” and Dexter “Decky” White. And Nephew Antonio “Tonio” White II aka “Boner”. Livestream: https://www.gethsemaneumc.org/live

Remembering Jason I have fought a good fight, I have finished the race, and I have remained faithful. And now the prize awaits me, the crown of righteousness, which the Lord, the righteous Judge, will give me on the day of his return. And the... View Obituary & Service Information

The family of JASON CORNELIUS WHITE created this Life Tributes page to make it easy to share your memories.

Remembering Jason
I have fought a good fight, I have finished...

Send flowers to the WHITE family.