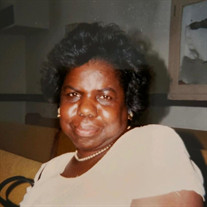 Jane Davis Trahan, family matriarch, went to her heavenly home on November 7, 2021. She was a beloved mother and grandmother. While she will be missed dearly, she is now back in the arms of her husband of forty-nine years who passed away in 2019. Jane was born on November 26, 1944, to the late Rosa and James Davis in Miami, Florida. She was one of six children raised by their devoted father after the passing of their mother. Growing up with three brothers and two sisters in the close-knit, Coconut Grove community and having an extra-large bloodline with numerous relatives and lifelong friends was the perfect backdrop for Jane’s fond childhood memories, funny sibling stories, and celebrated family achievements. As an extraordinary scholar, Jane was selected and featured by local media as The Miami Herald Top Teen in 1961. She was also the valedictorian of her class and graduated in 1962 from George Washington Carver High School in Miami. She went on to attend Florida Agricultural and Mechanical University where she excelled academically and earned a degree in accounting. On April 4, 1970, Jane married her childhood sweetheart, Charles Donell Trahan. Their union was blessed with three children, as they established deep roots in the Washington, D.C. metropolitan area. Jane worked as an auditor for the U.S. Government Accountability Office for thirty-seven years. She retired in 2003. After retiring, she loved spending more time with her family, relaxing at home, listening to her favorite hymns and contemporary gospel music, and traveling. She was a devoted wife and mother who always put God and family first. With exceptional poise and grace, Jane mesmerized her family by how well she juggled her full-time career, full-time homelife, and ministry endeavors. This included delivering dynamic sermons as a volunteer preacher and showcasing her tenor vocals while singing in church choirs. Her children—lovingly nicknamed, “Ree,” “Dee,” and “Char-le-Tee”—will particularly remember her as the G.O.A.T. (greatest of all time) homework checker, a favorite carpool mom for church and extracurricular activities, and the best shopping companion ever. Her children will also remember her as their #1 supporter; she was always attached at the hip to their other #1 fan, their dad, during their football, baseball, and basketball games. Jane’s three grandchildren will cherish sweet memories of her big hugs, generous kisses, joyful smile, and cheerful laugh, as she enjoyed and loved them dearly. She leaves to honor her memory, her children: Charles (Andrea), Cherie, and Demetria (Joe); her grandchildren: Antjuan, Shaun, and Jessica; her sisters: Bettie and B. Patricia; her brothers: Richard (Doreen) and James, Jr. (Earlene); her brother-in-law: Pernell; and a host of other family and friends. She was preceded in death by her mother and father, husband, and younger brother, Lewis. As many of you know, our mother had very strong faith. She believed in Jesus, and we know she now rests peacefully with Him. Now it’s our turn to live life to the fullest and keep her legacy of love and a joy for laughter alive. The live-streaming of Mrs. Trahan's service will begin at 10:30AM.

Jane Davis Trahan, family matriarch, went to her heavenly home on November 7, 2021. She was a beloved mother and grandmother. While she will be missed dearly, she is now back in the arms of her husband of forty-nine years who passed away in... View Obituary & Service Information

The family of Jane Davis Trahan created this Life Tributes page to make it easy to share your memories.

Send flowers to the Trahan family.