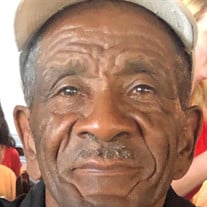 Celebrating the life of Harold Octavius Gooden also known as Cyril, Uncle Sia and young Mango. On January 3rd 1940 a bouncing baby boy was born in the small community of Ashton, to Nathan Gooden and Mary Smith. He was the 5th of 9 children. As a young boy, even though he was quite small in stature, he was forced to become a man and take care of his mom and siblings as his father decided to leave the family. All this occurred at the tender age of 12. This unfortunate event impeded his opportunity to attend school as a normal child. However, this hardship helped paved the way for his development into a very responsible hardworking young man. On a fair day in August 1973, he had the pleasure of crossing paths with a shy, long legged young lady fondly called Laura, the sight of her, put a twinkle in his eyes and with much perseverance on his part, he managed to capture her heart, and she became his wife in 1981. This is the woman we now know as mommy. Even though life was quite difficult being a farmer, love was abundant and this union produced nine beautiful children five girls and four boys, of which he was so very proud. Two of which unfortunately predeceased him at an early age. His love for his children was very obvious, he enjoyed watching us play and he looked at us with so much love in his eyes and his favorite quote was “ALL THESE ARE MINE.” As Children we got into a lot of fights, but he would lovingly scold us and remind us to love each other. Our dad was a hardworking, proud man of principle and integrity. He was a no-nonsense father, and a simple look was all it took to let us know what time it was. He was a disciplinarian who taught us to be respectful and self-sufficient when we misbehaved all mom had to say was wait until your father comes home and we became instant angels. As time went by things got better and our parents got the opportunity to visit daughter Sheril and son Clive in America for vacation on a yearly basis, however in April of 2018 after being here for only one month he fell ill and was diagnosed with stage 3 colon cancer. Throughout his illness there was never a dull moment around him. He was always jovial, upbeat and smiling, he could find humor in any situation. He put up a strong fight against this deadly disease but at 10:10pm on the night of October 29th he lost the battle, and we lost our hero. He is survived by wife his widow Laura, five daughters Jennifer, Rose, Sandra, Marcia and Sheril. Three sons Clive, Albert and Brysene, 14 grandchildren, 1 sister, nieces, nephews a host of other relatives and friends. Dad you will be missed and forever live in our hearts Sleep in peace dad Sleep in peace

Celebrating the life of Harold Octavius Gooden also known as Cyril, Uncle Sia and young Mango. On January 3rd 1940 a bouncing baby boy was born in the small community of Ashton, to Nathan Gooden and Mary Smith. He was the 5th of 9 children.... View Obituary & Service Information

The family of Harold Octavius Gooden created this Life Tributes page to make it easy to share your memories.

Celebrating the life of Harold Octavius Gooden also known as...

Send flowers to the Gooden family.