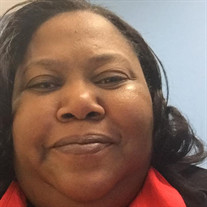 Erica Curtina Simms (46) of Fort Washington, Maryland entered eternal rest on Monday, November 20, 2017. Erica Simms was born on October 29, 1971, to parents Calvin Brown and Carolina Morrison. Erica was known to many by “E” or “Big E.” She was born in Manhattan and lived in the Bronx, NY on Sedgwick, where she went to School 229. The family then moved to Paterson, NJ, where she was able to do more of her early education at Public School 6. She then later went on to get her High School Diploma from Passaic County Technical School in 1989. After that, she went on to get her Bachelor’s Degree in Computer Science from Norfolk State University. In 1990, Erica met her husband Steven Simms on the campus of Norfolk State. They were introduced by their friend Dexter Waite on the yard. Dexter came to Steve’s dorm room and said “Hey come on I met some young ladies from New York and New Jersey and one is from Paterson.” From that late August day Erica and Steve became friends, ultimately marrying on August 9, 1997, at Trinity Baptist Church, Hackensack. They celebrated their 20th Wedding Anniversary this year, and during this time, they raised a loving family, including two children and a dog. Erica was always proud of her working years. She always remembered and bragged about having started working at a very early age. She talked about the times she had her paper route in Paterson, getting up early to deliver those papers on time. She fondly remembered how her dad insisted that her Pitbull Awesome accompany her through the rough streets, so that no one would mess with her, and they didn’t. After the paper route she worked at Shop Rite, her first job where she was able to obtain benefits. Her next job was at Sears, where she worked in the data department. During college she also had several jobs at various places. After college she remained in the Norfolk, VA area for a short period of time. Erica and Steve then moved back to New Jersey where she worked for Hertz Rental cars for seven years. Steve’s job as a nurse, however, brought them to the DC area, where she continued working for Hertz before finding her National Parks Foundation “NPF” family. Erica recently received an award for 10 years of service at NPF. She received a large bouquet of flowers and a gift card. Upon receiving this recognition, Erica was ecstatic and overjoyed as she did not realize just how much she was really appreciated there. Erica was the rock of stability to her family, friends, and coworkers. She was the take charge person you wanted in your corner when you really wanted to get something done. Some said she was the mother sister to all who knew her, because of her take charge attitude. She loved being around family and friends, and loved the times she spent with them. Erica was always the one who would pull the cousins together somehow, and she ensured that everyone stayed in touch. She always made sure to invite college roommates Erica Reis Barnes, Keisha Swain-Andrews, and others to BBQ’s restaurant in New York City whenever she and Steve visited New Jersey. In college she would get her college friends together for a Thanksgiving feast before everyone went home for break. She loved to travel and she and Steve were fortunate to have visited Hawaii, Canada, California and the Bahamas. Erica shared a passion for football with Steve and on several occasions they visited Dallas, to see their favorite team the Dallas Cowboys during training camp or for NFL games. In fact, their family dog was affectionately called Dallas. On staycations, Erica loved to go shopping with her mom and sister. Shop Rite travel weekends were a must. If she and her mom had great coupons, travel would be restricted to New Jersey and Maryland, to take advantage of double and triple coupon deals. Erica would give whatever she had to anyone she thought was in need, or simply because she wanted them to have it. Erica is survived by her husband Steve, mother Carolina, father Calvin, grandmothers Sarah and Pearl, daughter Domonisha, son Nashon, sisters Tamina, Sharon and Myesha, brothers Edwin (Rig), Antonio, Corey; mother-in-law Eva; brothers-in-law Mark, Morris; sisters-in-law Precious and Venecia. She is further survived by Uncles Stanley and Eddie, Aunts Luella, Kathy, Phyllis, Bunnie, Pauline, Carybell, Barbara and Nora and a host of cousins, nieces and nephews also Godson’s Jayden Gibbs and Ryan Barnes. She was preceded in death by daughter Skylar, Sister Yvette, Uncle Richard (Tricky), and others. We can’t forget our loving neighbors; Alice, Delores the Felton’s and Smith’s.

The family of Erica Curtina Simms created this Life Tributes page to make it easy to share your memories.

Send flowers to the Simms family.