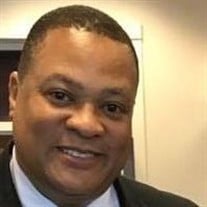 Attorney Eric Sean Jackson, father of three, dies at 52 .................... Eric Sean Jackson, devoted father, son, brother and friend, passed away suddenly on June 22 in Fort Washington, MD due to natural causes. He was 52. When Eric loved you, you knew it. He shared his love proudly and joyfully. One friend puts it best, referring to him as “a pure soul; the epitome of a loving, caring, and giving spirit.” Speak to 100 people in his circle of loved ones and each would tell you that they were his favorite, his best friend – Eric made everyone feel extra special. He was a devout Christian and lived his life as a testament of God’s love. An accomplished attorney, Eric assumed each role that he was given or he chose to accept with serious determination. As a son, he worked diligently to make his mother, Mrs. Dorothy Jackson, proud by excelling academically — first as a graduate of Milwaukee’s Rufus King High School, then as an undergraduate at Stanford University, and finally at the law school of the University of Wisconsin at Madison. He continued by serving as an usher at the First Baptist Church of Glenarden and passing along her lessons of enduring faith to his children, along with the tasty deviled egg recipe. Born in Milwaukee, Wisconsin, to Dorothy and Alexander Jackson Jr. (who preceded him in death), Eric believed in family first. His siblings Natalie Jackson, Annette Jackson-Thomas, Vicki Wise, Alexander Jackson, III, and Nicole Jackson all recount how he enriched their lives and those of their children. A sister, Monique, also preceded him in death. He was an uncle, and cousin to a host of family spread across the country. Eric treasured any time he had the opportunity to hug, kiss, mentor and feed them. The role he reveled in most was that of father to his three children – Sydney Catherine, Julian Alexander, and Ellis Joel Christopher. Within minutes of meeting him, you were guaranteed a delightful story of a family dining experience or a Dad brag moment about Sydney’s brilliant leadership skills, Julian’s outstanding grades, or Ellis’s recent success at bicycle camp. His daughter Sydney shared that “Daddy came to our schools to clap for us when we sang, played an instrument or a sport - and for parent teacher conferences. Daddy taught us to work hard, but also to enjoy life. We will carry everything he taught us in our hearts forever.” In addition to circling the Beltway with his children, he volunteered as a Stanford University Alumni Admissions Volunteer Interviewer for DMV students interested in his beloved alma mater. His Cardinal pride shone through while sharing The Farm’s national news, Chocolate Cardinal accomplishments and updates on his Branner Hall family. He made sure to pass along the witticisms of his mentor, the late Professor Kennell Jackson. Each day, he worked with his partners and associates at the Sack Law Firm in Northern Virginia, advocating on behalf of clients. He believed in solid, responsible lawyering and fully dedicated himself to each client. Eric was a skilled trial attorney who loved the courtroom, representing clients in business litigation, employment and intellectual property cases. He was particularly committed to Special Education related causes and cases. He also served as Commissioner on the Prince George’s County Human Relations Commission. When not fathering or at his desk, you’d find Eric manning his grill or preparing his home to host friends and his local adopted family, the Byrds, for a fish fry. His table always had room for one more, but they’d best be prepared to debate politics and listen to Whitney, or more recently, Wild Thoughts. Away from the house, he loved fine dining and the occasional stop by the 88-Cent slot machine to test his luck. On any given day, he would share an inspirational gospel song, hoping to touch a soul. Another friend insists, “I don’t feel like Eric had new friends. You could’ve met him yesterday, and he already felt like an old friend ... like the best kind of old friend.” Evening visitation hours are scheduled for Thursday, July 5, 2018 from 6:30 p.m. - 9:00 p.m. at Freeman’s Celebration Center, 7201 Old Alexandria Ferry Road in Clinton Maryland. Services will be held on Friday, July 6, 2018 at the First Baptist Church of Glenarden at 3600 Brightseat Road in Landover, Maryland. Viewing hours are from 9:00 a.m. - 11:00 a.m. The funeral services will begin at 11:00 a.m.

The family of Attorney Eric Sean Jackson created this Life Tributes page to make it easy to share your memories.

Send flowers to the Jackson family.