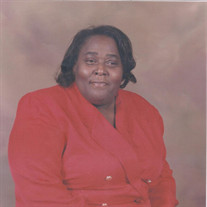 Minister Emma Bailey was born on January 28, 1950 in Middleburg, NC to the late Emma Ruth Plummer. She gained her heavenly wings suddenly on Monday, April 27, 2020. She was preceded in death by her daughter, Antoinette Henry; mother, Emma Ruth Plummer; three brothers Robert L. Plummer, Jimmie Plummer and Lewis Plummer,; and two sisters Lucille Russell and Linda Plummer-Potts. Minister Emma received her early education from the Vance County, North Carolina educational system. After relocating to Washington, DC, she later received her beautician’s license from Calvinade Beauty Academy, Inc., Washington, DC, where she serviced hair until she lost her eyesight. When one door closed, God opened up another one. As a result, Minister Emma was blessed to live on-site at the Rehab Center in Baltimore for a year where she received training on how to live an independent lifestyle with her disability. After completing the program, she was employed full-time by the House of Ruth, Baltimore, MD, where she worked until her retirement. Also, it was at the Rehab Center where she met her devoted husband, Marvin James Bailey. They united in holy matrimony on June 30, 1995. Minister Emma was a founding member of Anacostia International Assembly of God where Rev. St. Clair Mitchell serves as the Pastor. At Anacostia International Assembly of God, under the late Elder Edward Jones and Rev. Dr. Jessie M. Jones, Minister Emma was licensed to preach and teach the gospel in April 26, 2015. To perfect her calling, she attended the Berean School of the Bible (Global University) where she took many bible classes. Minister Emma received great pleasure out of spending time with family and friends and was the first to ask what the family was going to do each holiday. During her leisure time, she enjoyed listening to gospel music and sermons, praying, and reading the Bible. Even after losing her sight, Minister Emma a great cook. She was best known for her sweet potato yams and chocolate cakes! She leaves to cherish her memory: her husband of 25 years, Marvin James Bailey; her goddaughter, Ashley Jacobs, her god granddaughter Aniya Murphy two step-sons; Marvin Bailey Jr. and Tywan Bailey; two brothers: Walter Howard Plummer (Linda) of Fort Washington, MD; and William Plummer (LeRoi) of Hillsborough, NC. She also is survived by two sisters; Pastor Joanne Ward (Oscar) of Ft. Washington, MD; Pastor Bobbie Williams (Willie) of Rocky Mount, NC; two sisters in law: Joyce Plummer of Whitehall, PA; and Ruthie Shaw of Houston, TX; four brothers in law: Elijah Bailey, William Bailey, Ronald Bailey and Thomas Bailey. She also leaves a host of nieces, nephews, cousins, and friends. Minister Emma touched a lot of lives and she will truly be missed by all that she encountered.

Minister Emma Bailey was born on January 28, 1950 in Middleburg, NC to the late Emma Ruth Plummer. She gained her heavenly wings suddenly on Monday, April 27, 2020. She was preceded in death by her daughter, Antoinette Henry; mother, Emma... View Obituary & Service Information

The family of Emma Lou Bailey created this Life Tributes page to make it easy to share your memories.

Send flowers to the Bailey family.