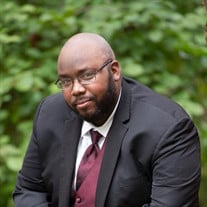 David Tyrone Sellers, Jr. was born on March 17, 1984 to Janine Susan Johns and David Tyrone Sellers, Sr. David attended both DC and Maryland schools. After graduating from Coolidge High School in 2002 he later went on to attend Job Corps where he received his certificate of completion. Growing up, David was the big brother to Jermey (aka Jerebeans), Adrienne (aka Adge) and Charlene (aka Lene). He was known as their Rock and Protector. He was so protective that sometimes it would drive them crazy. Often, they had to call on their Dad and Mom to get protection from the “protector.” It was all love, and they always had each other’s back! On February 10, 2007, David was blessed with a son (David III). Watching his son grow up was like watching David grow up all over again. They say music calms the savage beast. Five years ago, a songbird by the name of Shawnita Jones appeared in David’s life. Many say a man is the “rock” but to David Shawnita was his rock. This beautiful woman has walked many crossroads with David, the good and the bad. Shawnita was such a lovely song to David that on October 11, 2020 he made her his #1 hit by making her his wife. Always known as a no-nonsense type of guy, David always spoke his mind! However, he was smooth as silk, cool as ice and a warm heart. He had his pop’s swag and his mommy’s compassion. Over the years David worked in the security field with several jobs. His latest employment was with SecurAmerica where he served as a Special Police Officer. An avid and knowledgeable sports fan and gamer, David could talk football and basketball all day. His favorite football team was the Dallas Cowboys or as he called it “Jerry’s World”; Basketball was the Los Angles Lakers and of course Wrestling Wrestling Wrestling! David traveled all over the US to see Wrestlemania and other Wrestling events. David loved family gatherings and home cooked meals. He was known for leaving family events with mountains of food containers with leftovers. He was affectionately known by family and friends as : The Boy, Big Dave, The Weenie (His siblings), Sully, Nephew, Big Duwag, Big D, The Didboo, Big Doowap, Sellers, and the list goes on. This humble giant will always be in our hearts and memories. He is survived by: Wife-Shawnita Sellers, Son-David Sellers, III Mother-Janine S. Leath, Father-Anthony K. Leath (Pops) Brothers-Tink Leath (Preceded in Death); Jeremy Cooper Sisters-Adrienne Sellers; Charlene Malloy Grandmother-Salome Johns; Grandparents-George & Audrey Leath Aunts-Aunti Margie Baby Blanks; Betty Wheeler, Tywanda Petty, Theodora (Lou Lou) Johns, Uncles-Roscoe D. Johns; Charles Jones Nieces-Kennedy L. Allen; Jordan Sellers, Nephews-Elijah Sellers; Steve A. Jackson, Jr., And a host of other beloved aunts, uncles, cousins, family and friends.

The family of Mr. David Tyrone Sellers created this Life Tributes page to make it easy to share your memories.

Send flowers to the Sellers family.